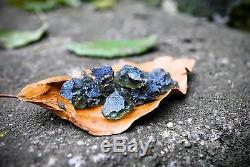 Moldavite is a tektite (matter formed after the result of an extraterrestrial impact on Earth) found in Czechoslovakia, a beautiful green stone that that formed over 15 million years ago after its meteoric impact on Earth. Moldavite is the only gem quality stone of extra-terrestrial origin.

For more information on Moldavite and any other gemstones you may be interested in, check out Love is in the Earth: A Kaleidoscope of Crystals, by Melody. Moldavite works well with the third-eye chakra, the throat chakra, and with the crown chakra. It also works extremely well with Sugilite, Celestite, Aquamarine, Lapis Lazuli and Opal, each producing overwhelming combinations of properties and frequencies that are most conducive to healing.

Quartz can add factors to the amplification and stabilization of Moldavites energy, which can aid in focusing its specific capabilities. All are encouraged to experiment with Moldavite and the energy and high vibrations it resonates at, as well as how it works with other crystal energies. Moldavite is a stone for transformation. On any spiritual path, Moldavite assists the owner in making changes in personal relationships that are due to occur.

It is known to facilitate interaction with ones spirit guide(s) and increasing the frequency of synchronicity (or opening ourselves to recognizing their occurrence). It stimulates cooperation between those of extra-terrestrial origins and those who are experiencing life on Earth. It carries on beyond the mirage of life, to a home from which one has been absent, providing the image of eternity and the vision and energy to translate the image into reality. It holds immense potential, for direct inter-dimensional accessing of higher dimensional galactic energies, to draw into the Earth plane those thought-patterns and light-vibrations which are optimal to ones preparation for ascension and illumination. It facilitates strong, clear, and direct inter-dimensional interconnected-ness between ones consciousness and the higher planes of light.

It expands the scope and the magnitude of the vibrational spectrums which one can approach, while allowing for a more encompassing passageway to those spectrums of which one already has access; that is, one will see more clearly and will see with an expansion of vision within the vibrational territory to which one has ventured, and/or one will be provided the inter-connection with the multi-dimensional horizons not yet experienced. Moldavite can be charged in the sunlight or moonlight while it can be cleared or cleansed with Selenite. Due to its intensely high vibration and energy, has been know to give some people uncomfortable feelings of dizziness or lightheaded. In time, the body can acclimate itself to Moldavites energy, but until then it is wise to limit ones exposure and direct contact with Moldavite in the beginning. (Image is only representative of listed moldavite for-sale).