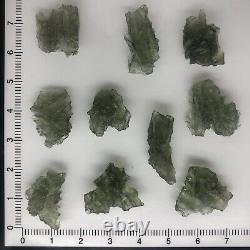 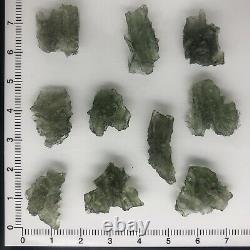 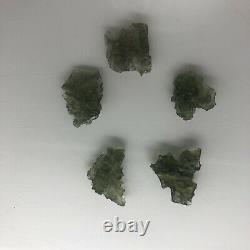 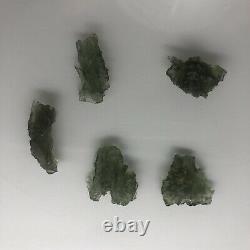 The pieces range is size from. 9 gr to 1.3 gr. Please review below for specifically how the grading is done. These moldavites have the characteristics of this locality without the full hedgehog, spiky texture seen in higher grade pieces.

The surface area is smoother with some chips and dings. As with all Besednice moldavite pieces, these crystals have spectacular light reflection, noticeable lighter density than other localities, and a broad surface area. Smaller crystals are often used in creating grids while 1 gram and larger crystals are generally suitable for jewelry depending on desired setting. Besednice Moldavite are the most prized & sought after of all Moldavite.

Known as "Hedgehogs" for their spikes, these beautiful green, rich & dark textured tektites were found in & around the Besednice townsite & nearby fields. Many small pieces seen today were likely found in upper layers of the fields, have some erosion and dings, and many were damaged when extracted. A very notable physical characteristic of Besednice crystals is that their density is slightly less than that of other moldavites, even those found within a few kilometers away. This produces a much larger surface area, unique frequency and distinctive appearance. Known as the Emerald that fell from the universe, Moldavite is a tektite (Meteorite) with a hardness ranging from 5.6 - 7 on the Mohs scale. The asteroid hit the earth 15 million years ago in what is now known as the Ries Crater in Barvaria (Germany).

The material from the impact was sent flying into the atmosphere, cooled down & formed the melted glass into what is now called Moldavite. The splash field or primarily landing of the melted crystals returning to earth is in the areas of South Bohemia (Czech Republic). Moldavite is not found in any other region on the earth. Moldavite has been used since Stone Age times as a talisman and amulet for good fortune. Many people believe that it came to aid in earths transition and healing and that the time has come to use Moldavites energies wisely.

It can greatly enhance the effect of other crystals, taking them to their highest vibration. The green glass cup known as the Holy Grail at the last supper is believed by some to have been moldavite. Authenticity of all crystals is guaranteed. Please feel free to reach out to me for any questions and/or any more information regarding the specifics of these items. The item "Besednice Moldavite Wholesale Lot 10 Piece Small Crystals 11.06gr/55.30ct" is in sale since Saturday, July 24, 2021. This item is in the category "Collectibles\Rocks, Fossils & Minerals\Meteorites & Tektites". The seller is "starcrystalshop" and is located in Hollis, New Hampshire. This item can be shipped worldwide.